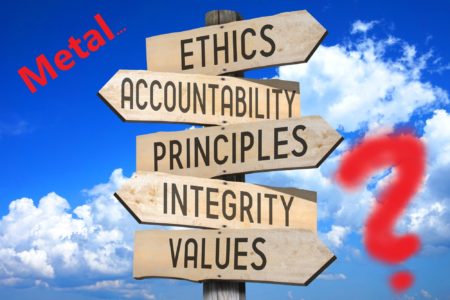 Our project on metal and law at the University of Graz is advancing. We are even a bit ahead of our planned schedule. In the past months, I have worked my way through existing metal research literatures, also paying close attention to older metal studies works’ take on questions of politics, ethics, norms, in short on the norm-related sonic knowledge of metal.1

As explained in my recent last blog post, cultural-historically, we now have a pretty solid impression of how metal culture, most of all since the early 1980s, developed its discourse centered on law and norm-related phenomena, on a European and global level. Starting from this broad framework, the next steps are to engage critically with the key results from this first phase and develop the final empirical framework (questionnaires for interviewees, selection of interviewees) for researching the norm-related sonic knowledge in the Styrian heavy metal scene.

This is the point where we go from the macrosphere of the European and the global to the microsphere of the local in the Austrian region of Styria with its capital city Graz. In this step, it seems crucial to me to reflect upon an aspect which frequently ‘popped up’ in existing research literatures and also when talking with potential interviewees and local scene stakeholders.

Frequently, when re-reading existing works in metal studies, I was struck (or to be more frank: hit) by the fact that actually metal studies has rather serious issues when it comes to addressing the moralities, polictics, values, and ethics of metal culture since the 1970s. So far, it is only clear that metal has its ever-varying values, moralities, and political agendas.

But as shown brilliantly by Rosemary Lucy Hill in her excellent key note lecture in Salzburg last year, metal studies has serious issues when it comes to developing a convincing grip on phenomena in the culture that belong to the sphere of values, norms, or moralities. We know that there are ‘problematic aspects’ and partially we understand them, but we do not really know how to explain and deal with them in metal studies in a historical longue durée perspective.

Of course, I have no full solution to this problem in a short blog post. But I want to raise two points that seem to be relevant and so far neglected. Much more than now, we should also take these discussions (and the apparent non-ability of metal studies to deal with them) as historical phenomena, that have a past, yet today still effective history of their own.

Still, Kahn-Harris’ concept of the ‘reflexive anti-reflexivety’ in the extreme metal scene is the most convincing analysis of how a specific subgenre of metal developed its norm-related discourse.2 Kahn-Harris showed that extreme metal scene members consciously and reflexively decided to ignore ‘problematic aspects’ like violence, racism, homophobia, or simply hatred in their culture.

This is true. But if we approach this issue historically, two serious challenges are not solved convingly in his analysis. Reflexive-antireflexivity is a habitus the extreme metal scene seems to have encultured. However, as a first aspect, we have to intepret this habitus as a culminating point of a history of living metal since the 1970s. Reflexive anti-reflexivety did not fall from the sky in the early 1990s. It simply never was the case that extreme metal fans were historically independent from  their contexts and 100% consciously or independently decided to adopt this concept. So far, the analysis is biased towards a rather ahistorical presentism.

Much more than currently, we have to acknowledge that this way of approaching their own culture has deep roots in metal culture and outside metal culture; it developed at the points where the moral spheres of both touched upon each other. In short: reflexive anti-reflexivety has a history. Unambiguously, it is a history we do not know much about (to formulate it cautiously).3 This habitus is a historically created way of knowing metal and we have to research how exactly metalheads learnt to know metal in this way.

The second point, perhaps, is even more critical for metal studies in its current phase of becoming an independent field of studies. Most metal scholars are metal heads themselves. This fact for itself is no problem; I even think it is a big advantage because with fandom comes a lot empirical knowledge.

However, with the fact that many metal studies scholars are (extreme) metalheads  reflexive anti-reflexivety found its logical way into metal academia. Hence, the concept Kahn-Harris described could wander beneath the surface into the the moral sphere of metal studies. We should look sharp at this point of moral intersections. I hope a cultural-historical take on this discussion can bring in new insights – by scrutinizing the history of metal’s norm-related discourse.