In the recent stage of gaining clearer contours as an independent field, metals studies scholars have demanded more theoretical self-reflection and rigor. On balance, they said we ought to more carefully reflect upon our theoretical and methodological approaches.1 Or as Savigny and Schaap put it, we had to ‘put the “studies” back into metal studies’.2 I want to address this claim from the point of view of a trained historian.

That said, I hope to make clear how the careful introduction of history as a discipline into the multi-disciplinary realm of metal studies could enrich the field in the years to come. From my point of view, locating metal means locating metal in history. But also, in turn, it means locating history in metal. Putting metal into its time, more accurately putting metal into history, requires us to become more aware of some crucial epistemological points, we should adhere to when researching metal and history. I want to elaborate upon these points.

I go three steps. First, I give a very short description of the position of history as a discipline in metal studies, from my point of view. Second, at the base of an empirical example, I try to illuminate the consequences from my first section. Finally, as my conclusion, I attempt formulating four points we should be aware of when putting metal into history in this sense.

We already do have an eclectic range of reflections on metal and history.3 However, so far, those reflections have come from cultural studies, sociology, musicology or other disciplines. Now, the questions that historians ask are not better than those questions; but they differ from them in theoretical and empirical terms. Thus, the current relationship between metal studies as a field and history as a discipline is characterized by the fact that history, as a discipline, is not satisfyingly represented in the field – again from the point of view of a historian.

Thus, I think the specific perspective of ‘the new cultural history’, that was developed by Lynn Hunt and other scholars in history since around 1990, could be an enrichment to already existing research on history and metal. Above all, the innovative theories from the recent discourse of ‘sound history’, a fruit of the new cultural history, have the potential of bringing in more historical awareness.

Sound history, a research strand developed by scholars such as Dominik Schrage, David Hendy, Gerhard Paul, Ralph Schock, Anna Langenbruch and others,4 examines the ways how sonic sense-making changed over longer periods during the 20th century. Sound historians ask how hearing and listening developed over periods of decades during that century. They suppose that our cultural framing and habitus of hearing and listening prefigure the ways we make sense of the world we live.

Crucially, in the second half of the 20th century, musical pop cultures and their sounds became a structural framework, that conditioned our ways of hearing and listening. On a global scale, we cannot think of the sound of the second half of that century without referring to the sound of the electric guitar – however stereotypical and flat this observation may be today. Sound historians analyze the patterns of the diachronic longue durée of those more than seventy years since the Second World War. A German-language article by Dominik Schrage explains this perspective:

The musical mode of hearing enables us as subjects to experience comprehensibly the effects of sounds and rhythms, be it contemplatively or expressively – plunging into music or dancing to it. Like images, sounds cannot be transferred to linguistic meaning without fractures; but both are experienced as being in harmony with each other, correspond with moods, affections, and emotions in the experiencing subject. Sounds, melodies, chords, and rhythms share a fundament across cultures, but in different musical cultures they are encoded, systematized and linked to harmony theories in different ways.5

Thinking of metal’s history of almost half a century, we can assume that also metal has its own sound history since 1970; its specific frame of auditive and cultural sense-making. We can suppose that the historically varying settings, in that people have heard metal and listened to metal, influenced crucially how metalness identities have been constructed. Likely, this sound history prefigured heavy metal’s cultural frame, the construction of scenes.

For instance, the frame of hearing and listening in the early 1970s, when Black Sabbath’s (1970) self-titled debut was released, differed eminently from the frame in 2013, when their last LP 13 was issued. The frame differed in terms of media, of networks, of listening conditions in the broadest thinkable way. Today we listen to both records on Spotify, inform us on them on the Encyclopaedia Metallum website, and jump from them to Rihanna if we have a bad taste. Researching this frame requires the diachronic perspective of sound history.

Thus, this main question for the changes or stabilizations of the forms of cultural sense-making in the sound history of heavy metal, interpreted as a history of now almost fifty years, is the fresh aspect that could be introduced by history as a discipline. Historians using their expertise and knowledge of historical processes, also their expertise in interpreting and reading historical sources, could bring in new aspects to metal studies. On balance, the currently lacking expertise from historians promises more historical awareness and self-reflexivity.

To this point, I have dealt with history on merely a theoretical level. Theory is there to be applied on empirical realities. Thus, in this second step of my thoughts, I turn to an empirical example, aiming at illustrating what I just said about sound history.

Some weeks ago, with a colleague from musicology, I have submitted a proposal for a three-years research project to the Austrian Science Funds. Herein, we plan to examine the sound history of the metal scene in my hometown of Graz, Styria, located in Southern Austria, close to the Slovenian border, since about 1980. We want to research the local scene’s sound history.

We specifically ask for the role of law-related phenomena in this case study. Since Judas Priest’s classic anthem ‘Breaking the Law’ (1980), topoi of law-breaking and other norm-related imaginations of law and justice are important in metal around the world. They seem to have played a role in scene-construction in Graz, Styria an Austria.

For the proposal, we conducted first research and had first oral history contacts with scene stakeholders. I want to show you an example of a song by a local band. I hope, on the base of this song one can see the potential of the approach I just described.

Our example artists, Heathen Foray, are a pagan metal/ melodic death metal group from Graz. They are well-known in the local scene and had some international success since 2004. On their album Inner Force (2013), we find the track ‘Mei Laund’ (Engl., ‘My land’) with lyrics written in Styrian dialect:

These are the quintessential parts of the lyrics with an approximative translation to English language: 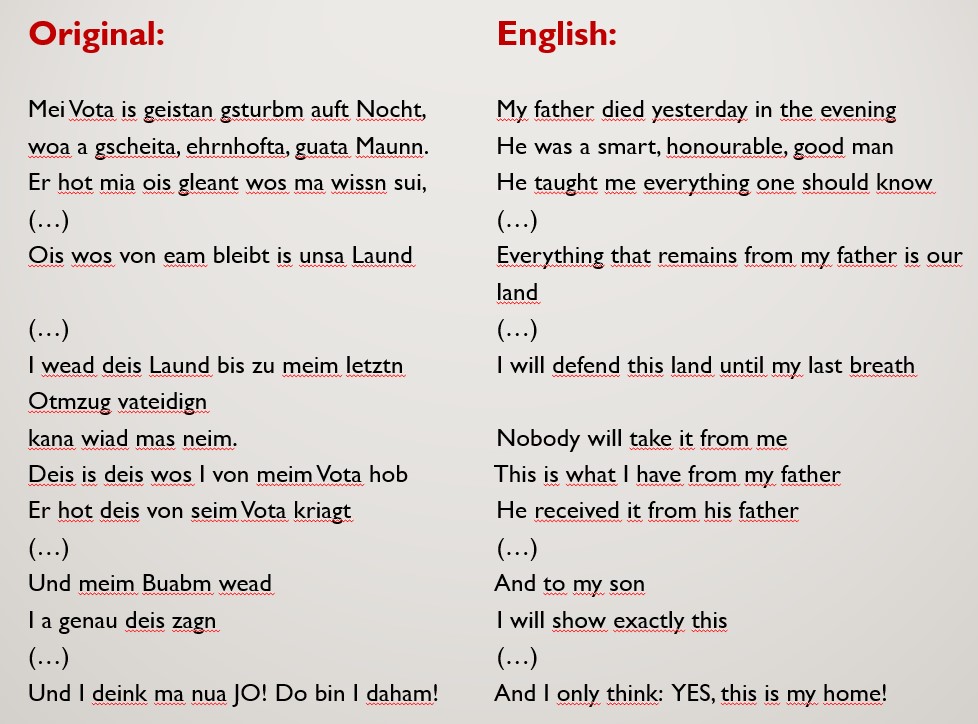 At a first glance, this track seems to be a ‘usual’ song of the pagan metal and folk metal sub-genres. But there is more to it. The narrative of the song presents the story of a local man. His father died and, now, the man inherits the family’s land. So, he becomes the landlord. This is a clearly patriarchic narrative, taking place in a rural, early modern setting or a medieval setting, perhaps also a fantasy setting. The male landlord has to defend his land. The protagonist tells us his story and that he will teach his son exactly what he learned from his late father.

Looking at the track as a product of 21st century heavy metal sound history, we find a quite unique way of acoustic and cultural sense-making. At the heart of the song is a distinct concept of law and legal norms. Only the son can inherit the land from his father. Those are very strict and archaic, deeply conservative and patriarchic ideas of law and the private property of land. Put into extreme metal sound, those ideas formed the cultural protocol that structures the entire story. It characterizes the song from the beginning to the end.

In order to really historically understand the song, to put it into history, in our project we plan to perform quite a broad spectrum of sound-historical close readings.

First, we will have to read Heathen Foray’s ideas of law and heritage before the backdrop of disciplinary historical research results on medieval and early modern law systems.

Secondly, in a musicological analysis, my colleague Charris Efthymiou will answer the question whether this specific idea of law is represented by distinct musical and formal patterns.

Thirdly, we plan to put those results into the longer history of the local scene since 1980 and of ‘glocal’ developments.
So, sound-historical expertise, in this case, intends to performs a broad contextualization in the disciplinary knowledge of history and seeks permanent interdisciplinary contact with musicology

I come to my conclusion. I tried to show that history, most of all the recent discourse of sound history, has the potential of probably enriching recent metal studies discourse. Its expertise of researching the longue durée dimensions of auditive cultural sense-making could support our search for more theoretical rigor. On balance, the result of my reflections can be summarized in four points. When we put metal into history, we should

• make full use of history’s disciplinary expertise in reading and interpreting historical sources,
• always read metal history before the backdrop of broader research results in global cultural history,
• pay crucial attention to the analysis of the longue durée dimensions of sound-historical sense-making,
• and permanently keep the dialogue with other disciplines in metal studies.